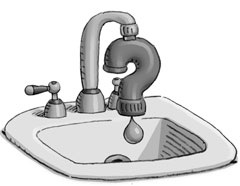 Summary:
The reason why government decides to have new water rules is because the concerns of pathogens in the tap water. The new regulation switches focus to a type of bacteria that more accurately reflects the presence of pathogens that can make people sick. For two decades, water agencies have used an indicator of water quality called total coliform to check for dangerous fecal matter in drinking water Under the new rule, the agencies will add tests for E. coli, the most dangerous pathogen. Discovery of any amount will spur immediate notification of customers. E. coli, found in the intestines of animals and humans, can get into the water supply from runoff or sewage. It causes diarrhea, and in some people, especially children and the elderly, it can lead to kidney failure and death. The most common E. coli infection in the United States afflicts about 70,000 people a year. Most of the risk comes from food; about 15 percent of the cases are from tainted water. Smaller systems are  with less staffing and resources to investigate total coliform detections -- will be most affected. ​Smaller systems have historically had more violations due to lack of money, staffing and other resources.
​
Reflection:
The reason why I chose this topic was because that water is an essential in life. The most interesting part in the article is we expect to have fewer pathogens flowing out of tap water according to the new national drinking water rules. E. coli is harmful for human especially children and elderly. We have 86 percent of small system violations are for record-keeping failures. I think this revision is a good thing because they will face fewer violations since small and rural systems might have more costs. In United States, we have too many violations involving E. coli due to E. coli have totaled about 500 or 600 a year, according to EPA data, while violations for total coliform have consistently exceeded 5,000 annually. thus that should bring our awareness on this topic.
Powered by