http://www.scientificamerican.com/article/california-to-unveil-new-flammability-standard-to-avoid-chemicals-in-furniture/
Summary:
Usually the U.S. furnitures have been adding brominated and chlorinated chemicals to the foam, thus it can slow the spread of flames, but now the state officials say they will require a smolder-only test, which manufacturers can meet without flame retardants while still preventing fires. These flame retardant chemicals are harmful to human body. The bad chemicals are just keeping building up in people's bodies. Additionally, this is really for pregnant women because it can cause some severe health problems, such as reduced IQs, attention problems and other neurological effects in children expose in the womb or during infancy. The reason why the government has decided to do smolder-only test is because smoldering objects such as cigarettes, heaters and extension cords, rather than open flames, are the biggest source of household fires. Many manufacturers, who are no longer compelled to make materials open-flame resistant, will no longer use flame retardant chemicals in their products.  Manufacturers would instead be able to purchase and use the less expensive non-flame retardant materials therefore saving in material costs.

There is already 85 percent of furniture on the market meets an upholstery smolder standard which is the reduction of fire retardant chemicals. Although the government states that the manufactures will no longer use fire retardant chemicals in the upholstery, these harmful furnitures are still going to exist for decades because many people keep couches and some other furnitures for years. Children and pregnant women are particularly vulnerable to fire retardant chemicals, because ame retardants are mixed into consumer products, rather than chemically bound, they can leach out and stick to dust particles that people can inhale. Therefore, the bioaccumulation starts.

Reflection:
The reason why I chose this article is because I think it is linked with human health. The most interesting part in the article is the smoldering objects are a major of household fires rather than open flames. I strongly insist that we can have more places to publish the fact that these old furnitures have been adding fire retardant chemicals to it which is going to cause reduced IQs, and some other health problems. The fire retardants can leach out and sick to dust particles that people can inhale, that is when biomagnificaion comes around, this is going to hurt the pregnant women the most, because the bad chemicals are just building it up in their bodies which it will later give their kids different types of health problems. I think society should appeal everybody to not use these fire retardant furnitures anymore and let them the negative things about it by using all kinds of way. 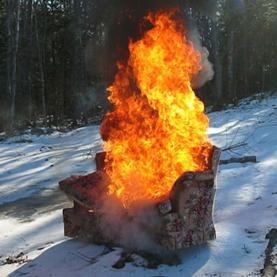